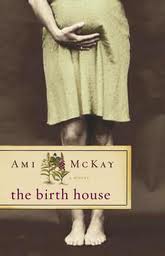 Canada Reads recently announced the 2011 picks.  I decided this year would be a good year to pay attention to Canada Reads.  While perusing CBC’s website, I discovered that the criteria for the books is not merit. Canadian celebrities pick their favourite books. This made me doubt the value in reading the books.  I mean, why should Roch Voisine have a say in what I read.  (For the record, he’s yet to join the Canada Reads Alumni).  But I thought this book would be fun, despite it being chosen by a TV host and designer.

The Birth House by Ami McKay is set in the early 1900s in rural Nova Scotia. McKay’s main character, Dora Rare, was a young woman born into a family of six brothers. Her birth was a miracle in her family – there hadn’t been a female in five generations born to Rares. As a young woman of fifteen, she begins training with the neighbourhood midwife. She learns Miss B’s trade, attending births and gaining a reputation among the women of the community as someone they can trust with their bodies and their babies.

Dora marries a local man, named Archer Bigelow. Archer Bigelow’s family has money, but he has no job. He is unloving and abusive, and forbids her from practicing midwifery. Archer often disappears for bouts of debauchery, depression and drunkenness. Dora however, believes that everything will be made right, if only she could conceive a child.  This never happens. As Archer becomes more despondent and distant, Dora becomes inspired by her friends to practice her trade of midwifery.

Dora runs into some professional discord with a Doctor of Obstetrics, from the next county,  who has opened up a modern Birth Centre with the most modern medical treatments.  Dr. Thomas struggles to gain business from traditional, rural women. He resorts to discrediting Dora’s ability and knowledge. She remains firm and convicted.

A pivotal moment in the book occurs when, one evening, an abused girl of thirteen shows up on Dora’s doorstep. She’s in labour, and abandoned by her family.  The young woman dies while giving birth, but the daughter is left in Dora’s care. She calls her Wrennie and raises her as a daughter. Archer (her husband) dies in an unfortunate sea accident, but his older, unattached brother Hart, steps up to the role of helping Dora with the house and the animals.

In the end, she is able to triumph over Dr. Thomas and the rumours of her witchery.   She practices being a midwife using the old traditional methods passed down to her from Miss B. Her house becomes a birth house, where women’s bodies are respected and cared for with love and compassion. She never remarries, but she does start a monogamous sexual relationship with Hart (her brother-in-law) and grows old and happy.

I read this book when I was pregnant with Elijah (2007), but I was interested in reading it again. It was a reprieve from the types of books I’ve read lately. The Birth House does not startle the reader with introspective character development and insight, the novel is driven almost solely by plot and interest.

I still enjoyed this book. It was light and fun. Light, because Dora Rare was not a strong character and hard to fall for.

It is my humble opinion that a woman in her place and historical time would not act the way Dora  acted. Ami MacKay certainly wanted to say something through Dora.  The theme of a woman’s rights to compassionate and intuitive care  – before, during, and after – the birth, were clear and legitimate. I believed in Dora’s cause, but I would have enjoyed this book more if it had presented her theme with tact and subtlety. This book doesn’t hint at something but rather screams it from the pages. I felt it was unrealistic that a young woman who grew up in the family she did would be able to train under a midwife;  her family was very traditional. Later, this liberal lapse in parenting is contradicted when her mother insists she marry Archer Bigelow. It was also unrealistic that this woman would take a lover (Hart), and be explicit and unashamed about it.

Dora seemed to express thoughts and feelings of a woman from the 21st Century, rather than the 20th. Something about the whole thing, just didn’t sit right with me.

Should you READ this book?

On a whole the book is a fun read. Especially for my peers, late twenties child rearing/bearing women. The desire to have respect, dignity and compassion is certainly something to fight for. We deserve it. The care I received through my Midwives for both the births of my children, is care like non other. I had never had such warm fuzzy feelings from the medical system before. I like this book because it celebrates that fact. I learned from McKay’s website that The Birth House is one of the 30th top selling novels of the last decade as reported in the Globe and Mail.  She also received a similar recognition from Chapters-Indigo.

Ami McKay is coming out with a new book soon. And, despite all my hard words I will likely read it! Here’s her website.

9 thoughts on “The Birth House by Ami McKay”

Search for a Book