The book set in Vienna at the wake of WWII centres around the lives of people living in an apartment block.  The narrative pivots around a string of murders that have occurred in the apartment’s vicinity. The solving of the crimes leaves the community nervous as the Nazis infiltrate the city’s police force. The pro-party detectives intend to solve the crimes to prove their control over all matters of Vienna.

The  characters that make up this fast read are connected to each other because they live in close proximity to each other. As fellow apartment dwellers with windows that face a central courtyard,  they can see into neighbours windows and draw inferences and theories about the people they live beside.

Vyleta reveals the world of  has dangerous consequences when much of our day-to-day interactions with people are bases on inferences and theories. As the story progresses, Vyleta does a striking job of carrying the people through the plot and each are a metaphor for the reasons humans stay quiet and hidden from the truth.

This book explores why individuals keep quiet, even if there are injustices. Often the reasons are selfish, but in many ways instinctive.  People are worried to be found out or have our own secret’s exposed. The most memorable character for me, was Dr. Anton Beer. A man who quit his psychiatry practise in order to pursue quieter and less noticeable (under the Nazi regime) means of medicine. He is an enigma,and his quietness and secretiveness  is an insightful theory as to why sensitive and intelligent people could let crimes against humanity occur.

Vyleta’s writing is smooth and easy like a nice cold beer.  Someone who appreciates literary novels would enjoy this book, but it would also be enjoyed by fans of fast paced mystery novels.  The characters were complex and engrossing.

Dan Vyleta is a historian and a writer.  My favourite description of himself is that he is an inveterate migrant. I believe he lives in Toronto. The Quiet Twin is his second novel, and was shortlisted for the Rogers Writers’ Trust Fiction Prize. It gets a giant: READ IT from me!

The least I can say about Practical Jean by Trevor Cole, is that it is a memorable read.  Last month, I saw Trevor Cole speak at a writer’s workshop and his description of his work intrigued me.

Practical Jean is a novel about Jean, a middle-aged woman who has just lost her mother to a painful and traumatic death.  Her mother also expected Jean to nurse and care for her as she died (for three long months).  This experience pushed, an otherwise only slightly quirky woman into a psychopath.

After the funeral, Jean has an epiphany. It develops from the decay she saw in her mother, and a memory of when she was six. Her mother was a successful veterinarian, and one day she euthanized a litter of deformed puppies. Six year old Jean, secretly watches her drown the puppies, one by one, in a bucket, and then disposes of the bodies in a garbage can. Jean, feeling like the puppies would be lonely without their mother, systematically, and nobly, drowns her favourite stuffed animals in the same bucket. She promptly throws their dead, stuff animal bodies out in the same garbage can.

The epiphany further develops while having a few drinks with her closest friends.  Jean decides she wants to save them from dying of old age in great pain. Her unwell, but entirely justified mind, decides to kill them all, even though should would miss her friends terribly.

The rest of the book is her plan to execute this.

Cole’s book is darkly interesting. The book is bizarre and unique, with tongue in cheek narration, and memorable character development.  The themes of the book are foreboding, yet it is not dark or horrific. I was left contemplating the value our society has placed on life, and the way we respect and treat death.

Trevor Cole received a lot of acclaim for the book, Norman Bray in the Performance of His Life, this book seemed to slip by a bit more unnoticed, but I think it is still worth the read. Another notable fact about Cole is that he runs a website called Authors Aloud, which features various Canadian authors reading pieces of their own work. It’s worth a few clicks. 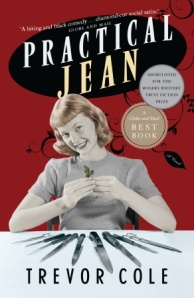 I was interested in the hype around this book, and Maile Meloy is an awesome handle ( I often have a quirky reason for being interested in a book). This book was also on a few recommendation lists (here, and here). Both Ways is the Only Way I Like It may be an awkward name, but it’s not an awkward read. This collection of short stories feels very American. (I’ll explain later) I generally focus my attention on Canadian literature, mainly because I enjoy it more and there is usually less online about them. While reading this book, I felt like I was peeking into a different culture in a way I wouldn’t have expected. The stories are all set somewhere in Middle America.

The stories centre on the theme of parents and children. Or, more broadly, being responsible or irresponsible. My favorite story was the first one, about a crippled polio cowboy who is in love with a woman from a random encounter. I also enjoyed the story about a man whose wealthy grandmother shows up on his doorstep after being dead for a month. The characters were decent, and the plots concrete.

I didn’t love the book, and I didn’t hate it either. What I couldn’t really figure out was why it was listed as a best seller for so long. What made it so popular? Her name? The Americans’ great love of short stories?

Meloy’s narrative was too similar for each character. The only truly memorable ones were the two I mentioned (in my humble opinion). It felt like I was reading 11 different life plots for the same character.

But certainly, the themes of the short stories held my attention, and as the title suggests, show the incongruent feelings that lie beneath us: how we want to be the child and the parent. We want to inherit money from people we don’t like, but we don’t want to pretend we like them. We want to have wild, surprising sex, but we don’t want to hurt our spouses and have an affair. We want to be protected, but also independent. Meloy did well to show this commonality. I don’t know, it might just be an American thing – like the unabashed love of processed cheese ( just kiddin’).

Here is another guest post by Alan Judson. Due to a back injury, he was able to read this entire book in one day. Bad for him, good for my blog. Note: Alan wrote this intro, not Elisha.

This book shares some of Coupland’s familiar pop-cultural references, wickedly smart, and punctuating almost every sentence: “If crows had longer lifespans and hands like Donald Duck, humans would have been obliterated eons ago.” Although a review in The Guardian (click here) may argue, gently, that it may be a bit too familiar to his past work, I would add that it is a huge improvement. The most similar book, Girlfriend in a Coma, went on way too long, and had an overtly preachy ending.

But what about this book?  It was written to be read in five hours, for the prestigious Massey Lecture Series.   Like a typical Coupland novel, it has characters that are punch lines in-and-of-themselves:  There’s the pastor who lost his faith by seeing birds yawn, and then steals his churches’ renovation fund;  The beautiful girl with no ability to recognize the major “human” emotions (laughter, joy, sadness) and spends her time raising mice and proving to her father that she’s human; the “cougar” who found a guy online and is meeting him at an airport cocktail lounge (the setting of the book); and so on.

The premise of the book is that several people are stuck inside a cocktail lounge when oil shoots up to $950/barrel, causing riots outside the airport.  Chemical fallout clouds come rolling by, and there’s a sniper on the roof, trying to do “God’s work.”  The airport is a perfect setting to ask about our modern identity because, as Coupland puts it:

Airport-induced Identity Dysphoria
Describes the extent to which modern travel strips the traveller of just enough sense of identity so as to create a need to purchase stickers and gift knick-knacks that bolster their sense of slightly eroded personhood: flags of the world, family crests.

They’re all searching for answers to the question of identity – is being an individual really a great thing?  What does it mean?   In the age of information overload, or we just filling our lives with second, not-as-real online lives?

The magic of this book is that it is fun to read, and it causes you to constantly ask “What makes up the human soul?”, Do I believe in life after death?”, and “Has modern times erased to idea that life is a story (and what should replace this idea?).”  The situations are funny, ironic and twisted.  The characters capture a sniper, who is hiding on the roof.   One guys shoots off his toe out of frustration, in between the sniper’s rants about godless society, the girl with no personality cleans his wounds with vodka.  The one beef I have with Coupland is that all his characters seem to be suspiciously as savvy as the narrator and voice of the novel.  It’s like every character is Douglas Coupland in disguise.

On the other hand, maybe that’s what it means to have a good writing voice.   Read this book.  It’s funny and profound.  If you want to read a bigger Coupland novel, look at Elisha’s recent review of Generation A.

Click on the title below to read other reviews of Douglas Coupland’s Player One:

Search for a Book